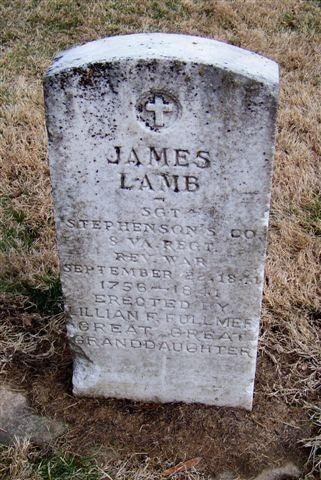 Photo courtesy of Allen Maricle
The 8th Virginia Regiment was a unique unit in the Continental Army, and its story has never really been told. It's men pointed west, not east, to explain their reasons for fighting.  They were mostly the sons of immigrants from northern Ireland and southwest Germany who fled violence, oppression, and poverty to find freedom and opportunity in America. Economically and socially unable to realize their dreams in the settled east, their families looked to the frontier for land on which to establish communities they could call their own.

Many of them were Indian fighters. It was Shawnee and Cherokee land, after all, that they wanted. When the King forbade settlement beyond the Allegheny Mountains at the end of the French and Indian War, many of them were more than disappointed: they were furious. King George denied them the very thing they or their fathers had fought for. The scalping, kidnapping, property destruction, and torture perpetrated by the Shawnee during and after the French and Indian War made many of them feel like they had a score to settle. When the Revolution began, they were not fighting over taxes and tea. They were fighting for the right to head west into Kentucky and Ohio. Many of them, in fact, spent many more years fighting Indians in the west than they spent fighting Hessians and Redcoats in the east. They were the original pioneers, setting precedents that would become the cultural fixtures we still see in western movies: fringed shirts, long rifles, long migration trails, Conestoga wagons, Indian fighting, dueling, and buffalo hunting (...yes, all of this in Virginia).

To realize their dreams of going west, they first had to fight in the east. Ten companies were recruited during the winter of 1775 and 1776 under Peter Muhlenberg, a 30 year-old pastor from Pennsylvania. Muhlenberg's recruiting sermons are legendary but weakly documented. Strangely, they have become fodder for the 21st century's culture wars. Some call him a heroic example of Christian civic engagement. Others say his story is a fantasy clung to by religious conservatives. 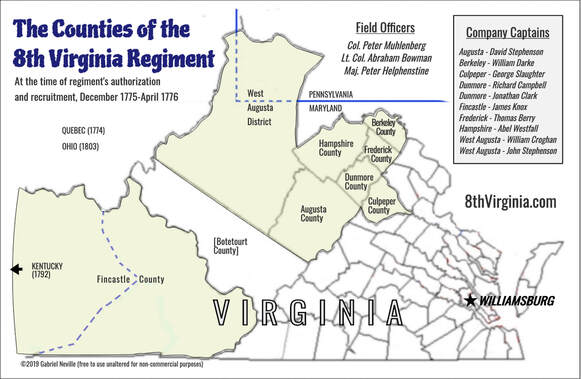 The 8th Virginia was initially designated by the Virginia Convention as "the German Regiment." It raised several companies in the lower (northern) Shenandoah Valley, to where thousands of Germans had migrated along the Great Wagon Road from Pennsylvania. Culpeper County, on the east side of the Blue Ridge, was also instructed to raise a company. Its Germans had come by a different path to the Germanna Colony. Irish strongholds in Augusta County, the West Augusta district (Pittsburgh), and Fincastle County (southwest Virginia and Kentucky) also raised companies. Protestant Irish soldiers may, in fact, have outnumbered Germans in the regiment. The Virginia Convention's real goal in calling the regiment "German" may have been to ensure that it was German-led. The Irish were regarded as wild, insubordinate, and radical. Their Presbyterianism was synonymous with dissent. Lutheranism, on the other hand, was hardly distinguishable from Anglicanism. The King himself, after all, was German.

Peter Muhlenberg was the Colonel of the regiment and Abraham Bowman the Lt. Colonel. Both were from Woodstock, in Dunmore (now Shenandoah) County. Peter Helphinstine, of Winchester, was the major. All three were German. The men they enlisted signed up for two years and came from a vast frontier territory stretching from the North Carolina line to Pittsburgh (then claimed by Virginia). Their service over those two years was so harsh that only a few dozen of the original 680 enlisted men persevered to the end of their terms, when they were discharged at Valley Forge. Frequently divided and detached, they seem to have served everywhere: Charleston, White Plains, Trenton, Princeton, Short Hills, Cooch's Bridge, Brandywine, Saratoga, and Germantown.  They froze through the winter at Valley Forge and were discharged in the spring. Some reenlisted, but most did not. Most of the original recruits, in fact, were by then dead or severely debilitated from two years of frost-bite, malaria, smallpox, malnourishment, musket balls, bayonets, and imprisonment after capture. A contingent of reenlisted veterans and new recruits served at the Battle of Monmouth before the regiment was folded into the 4th Virginia and ceased to exist. (The "8th Virginia" designation was used again, but in reference to a completely different set of soldiers.) Some of the regiment's best veterans continued to serve in the Continental Army all the way to the end of the war.

The Revolutionary War seems distant and hard to relate to for many Americans today. The slavery and powdered hair of America's eastern coastal communities seem like an alien culture now and many of the era's leaders now seem more like patriotic caricatures than actual heroes.  The rawness of the 8th Virginia's story is different.  In many ways these men were the creators of the pioneer spirit that built the America to come. Yet, their story has never been accurately or completely told. No book-length history of the regiment has ever been written. Muhlenberg, Bowman, and others in the regiment have been celebrated for their accomplishments in statues, biographies, place names, and songs--but much of that history is wrong, romanticized, overly debunked, or told without enough context to make it meaningful.